Of all the reflective tapes available on the market today, one stands above the rest in reflectivity and sight distance detection. In terms of brightness at night, the highest reflective tape is Orafol’s SOLAS M82 Marine Reflective Tape. It comes in three varieties. 1403 for hard flat surfaces, 1404 for flexible surfaces, and SOLAS Sew On for garments. All have the same incredibly high retro reflectivity, and all are weather resistant and made for rugged marine environments.

Oralite SOLAS tape’s high rate of reflectivity can be attributed to its micro-prismatic design, and metalized backing. The prisms embedded in the film are designed to efficiently return a high percentage of light back to the source in a tight beam like a spot light. This is different from ordinary reflective films that spread light out more like a flood light. A tighter cone of reflectivity means that visible light can be seen from much further away.

Oralite SOLAS M82 1403 or 1404 SOLAS tapes come in white (silver) only, not in any colors. (The closest tape to a colored SOLAS is a V82 film, available le at www.reflectivestore.com) Of note is that a bright micro prismatic reflective tape like SOLAS tends to have a grey or silver look to it in the daytime. It seems counterintuitive, however, when you think about the silver color of a mirror it makes more sense. In other words, SOLAS is not reflecting light back like white paper. It is reflecting like a mirror. And it for this reason, that SOLAS reflective tape is so bright.

On this page we have our 1″, 2″ & 4″ wide by 30 foot and 150 foot rolls of Oralite SOLAS adhesive tape. This is the FD1403 version that is designed to be used on both rigid and non rigid surfaces.  The FD1403 SOLAS is flexible but does not stretch.  It is specifically designed to increase the visibility of life jackets, ring buoys, life boats, and life rafts. It is also very popular for motorcycles, bikes and other applications due to its extreme reflectivity.

The tape is very bright and strong and the adhesive is very aggressive.  As you can see from the chart at the bottom of this page the candela rating is 1000 which is over 13 times brighter than standard white engineer grade reflective tape.  FD1403 is IMO Type I and II certified and meets USCG requirements for SOLAS (Safety of Life at Sea).

Article on the difference between SOLAS 1403 and SOLAS 1404. 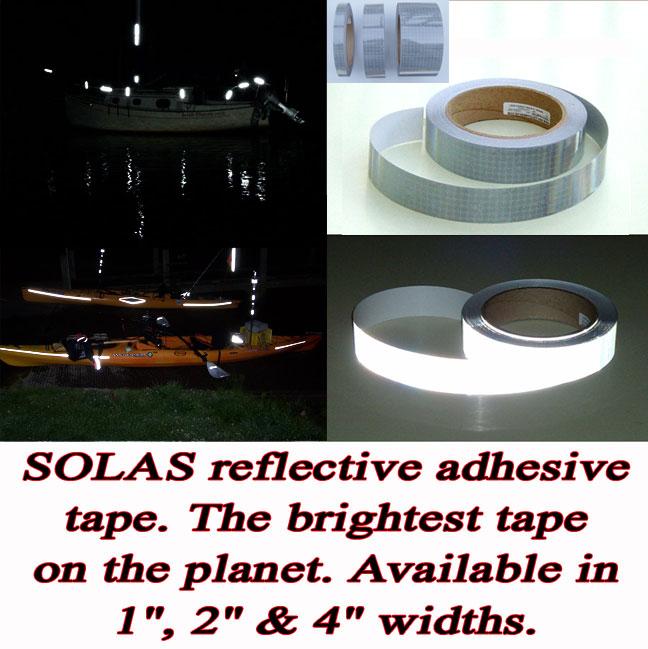 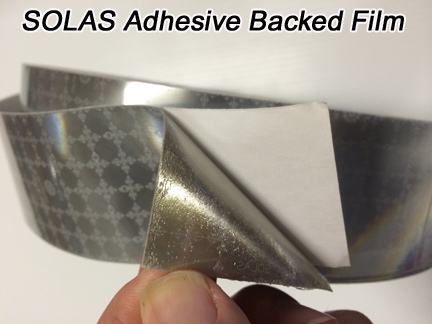 Adhesive Backed (peel and stick) Oralite SOLAS 1404 Tape is pliable, stretchable, and is the brightest reflective tape on the market. This is the FD1404 version that is designed to be used on Zodiacs, inflatable boats, liferafts, fabrics, survival suits, jackets, life preservers and other flexible surfaces. FD1404 SOLAS had a very aggressive 5 mil adhesive, is flexible, and will stretch. Keep in mind that even through FD1404 Conformable SOLAS is designed for flexible surfaces, it will also work well on ALL surfaces, especially those that require a flexible tape.

Oralite Adhesive SOLAS is also very popular for motor cyclists and bicyclists due to its extreme reflectivity. It can be applied to hard or flexible surfaces as well as jackets. When applying to clothing keep in mind that the tape will not go through a wash cycle unless it has been applied and then stitched on. The tape has a strong aggressive adhesive and is designed to withstand the harsh marine environment and extreme cold. As you can see from the chart at the bottom of this page the candela rating is 1000 which is over 13 times brighter than standard white engineer grade reflective tape. Incredibly bright. FD1404 is IMO Type I certified and meets USCG requirements for SOLAS (Safety of Life at Sea).

Article on the difference between SOLAS 1403 and SOLAS 1404.

Our Flexible High Intensity reflective tape is a great alternative to our regular SOLAS. It also has some distinct advantages over regular SOLAS.  First, it is flexible and will stretch to conform to almost any surface.  It is the only tape that will conform to this extent.  This conformability makes it perfect for marking odd shaped surfaces.  Second, it is less expensive than SOLAS.  Third, it comes in three colors, white, yellow, and orange.  We carry 1″, 2″, 4″, and 6″ rolls of this material.

Oralite’s (formerly Reflexite) V82 (AP1000) series tapes are some of the brightest in the world. They are very similar to SOLAS in intensity and appearance. The main difference is that the SOLAS tape has the ships wheel logo showing that it is certified for SOLAS applications. Oralite SOLAS also has 5 mils of adhesive versus 2.5 mils for V82.  SOLAS is also more expensive.

V82 Silver/White is a certified Type 5 film and has a reflectivity rating of over 700 Candelas. This is bright enough to be seen for thousands of feet away versus hundreds for standard engineer grade tapes. This makes this product ideal for applications that require visibility at great distances.  This material is very popular with motorcyclists and boaters. It  has a 10 year outdoor rating. We call this a SOLAS alternative because it is close in brightness and appearance but at a much lower cost per roll.  And best of all, V82 (AP1000) comes in 7 colors.  So if you are looking for the closest tape to a colored SOLAS, this is it.

On this page we carry – 1″, 2″ and 4″ (30′ or 150′ ) rolls of Fabric Backed Oralite “Sew On “SOLAS Tape is the brightest  sew on reflective tape on the market.  This tape is easily hand or machine sewn onto any garment. Once sewn on it is washable. (gentle cycle recommended) Our flexible SOLAS tape is specifically designed to increase the visibility of life jackets, survival suits, rain suits, back packs, jackets and a variety of other garments in marine and land environments.

Oralite (Reflexite) Sew On SOLAS is also very popular for motorcyclists and bicyclists due to its extreme reflectivity.  It is identical to our adhesive SOLAS but with a fabric backing instead of adhesive. This material is designed to withstand the harsh marine environment and extreme cold. FD1403 is IMO Type I and II certified and meets USCG requirements for SOLAS (Safety of Life at Sea). 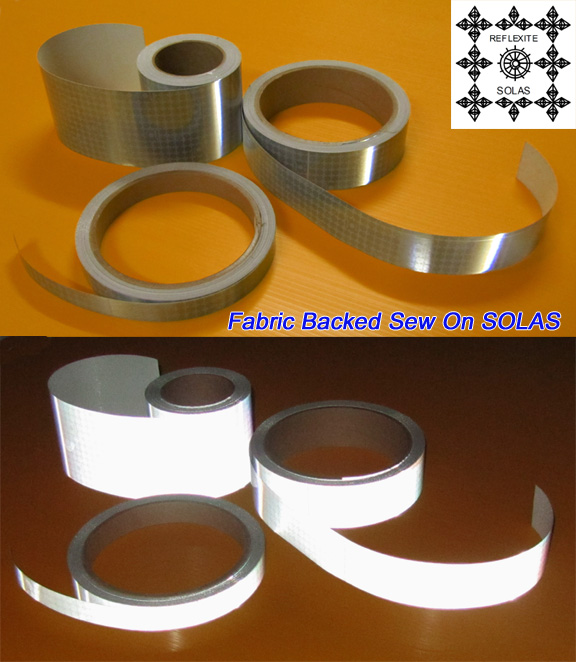 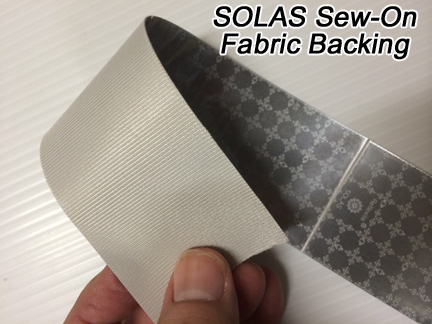